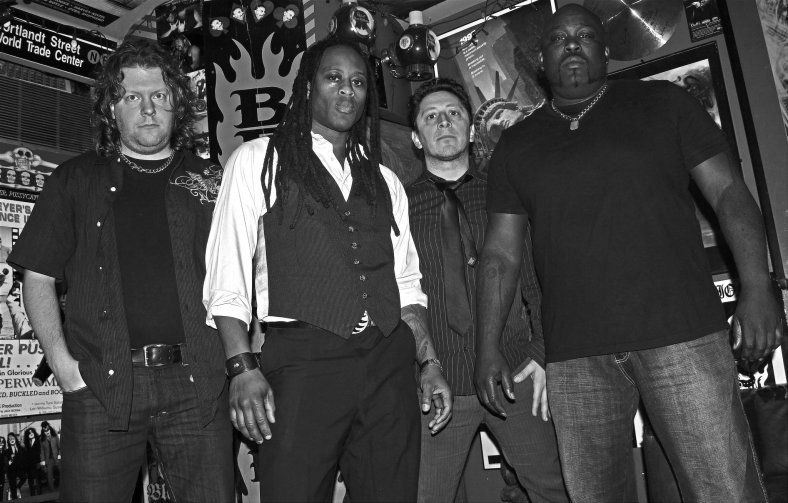 Eclecticism is a mother fucker. It can be one of two things to bands that bask in it’s glow. Sometimes, a band can be musically strangled by having to prove that they are so many different things in one package. On the other hand, if done correctly, your influences evolve into something that can only be called one thing. That thing, is an original sound.  The evolution of influential similarities into something genuinely qualifying as unique, is hard to pull off. The layers of sound that Dead Superstar bring to the table are nostalgic, yet fresh. And yes, they fall into that category of a band that has pulled off such a tremendous feat.

Dead Superstar was formed by bassist Troi Mosby and vocalist Terence Keith in 2005. The pair had recently come out of their experience with the band Perseverance. If you are not familiar with Perseverance, you missed out back then. I remember catching the band in an opening slot for Hatebreed back in the day. Perseverance was polished and doing it well. The band also managed to open up shows for  national bands like Biohazard and Sick of It All, among others.

Of course, when you taste that kind of success, you are tempted to make changes in the dynamics of what  you want to do musically. So, Troi and Terence set out on a path to create music that was aggressive in nature, but friendly to the radio rock markets that would help support them along the way. The result was Dead Superstar. By 2007 the band began to, “perfect their art with a hard rock sound that was heavy, melodic and packed with controversial lyrics about the human condition.” I figured I might as well quote this from their webpage as it is the perfect description.

With the band rolling on all cylinders, they entered the studio in 2009 to record with producer Joey Z, of Life of Agony fame. The ending result is Tribulations, an album of anthem like prowess that soars on every level.

I was highly impressed after my first listen to this intensely solid piece of musical craft work. Songs like Crossroads, Catch The Fire, and Redemption are rock radio friendly masterpieces that are begging to be heard in this mundane age of regurgitated mediocrity. One can only hope that the band’s exposure while playing with bands like Five Finger Death Punch, Lacuna Coil, and Taproot, will propel them into an even higher plain of recognition within the scene. The guys tour like gangbusters, so that will surely speed the process along as well. Download Tribulations, and tell them Upstate Metal sent you!